You are here: Home / Blog / “Ordinary People” Making A Difference 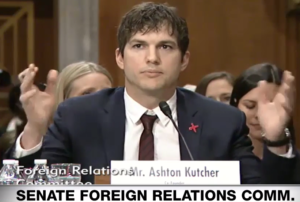 The following is a post I made on Facebook today after watching Ashton Kutcher testifying on his ideas for addressing human trafficking (watch here) and reading the attacking words in the comments. While you may not consider Ashton to be “ordinary,” I think what makes him extraordinary is his participation in our political process.

I’m so impressed with Ashton Kutcher testifying at our US Senate’s hearing on human trafficking. His testimony is filled with intelligence, expertise, and hope for addressing this horrific and unimaginable suffering. I’m more struck though by the comments I see, claiming he doesn’t know about politics and that he should stick to acting. While he addresses this quite eloquently in his testimony, it scratched at something I’ve been reading as a common theme on facebook – people saying they are “sick of seeing politics and they will unfriend those who keep posting about politics.”

I remind us all that our system of government is not just about a voting ballot, although this is a fundamental right of our democracy. It doesn’t start and end there, though. This is not a spectator sport. It is a participatory responsibility for all of us as citizens to do the best we can to shape our society with values we hold near and dear. I think we have lost sight of this.

If thoughtless observers were to outspokenly attack me when I testify to our Oregon elected officials to improve our mental health policies so that children may stop dying by preventable suicides, I would be so discouraged – and likely my insecurities and uncertainties about this process would win out and I might become silent, thinking ‘I am not a politician, what do I know?’ Instead, I am supported and I in turn support others.

Ordinary people are making a difference by participating in our policy-making process. I urge everyone to pick a topic you feel passionate about, learn about what is hindering improvements to it, take a stand and challenge your insecurities or complacency and show up for just one day in your state’s capitol to speak to it. Call your elected officials and tell them what is important to you. Stretch beyond the episodic act of casting a vote and participate in shaping our society in a more civil way than just complaining and soap-boxing on facebook. Once you do that, your messaging on facebook and elsewhere may carry more weight.

If you feel you might benefit from having a partner to help translate your concerns so doctors and teachers understand your child's needs, contact us and discover if DIY Advocacy coaching is right for you.

Contact us to receive information on events, workshops and advocacy opportunities.

This page will not link you directly to crisis services. If you or someone you know is in immediate crisis, call the Lifeline at 1-800-273-TALK (8255)